EOS Price Gets A Boost Amid Tim Drapers Arrival And Upcoming Blockchain Upgrade; Is $4 in View?

5 months ago via Coingape 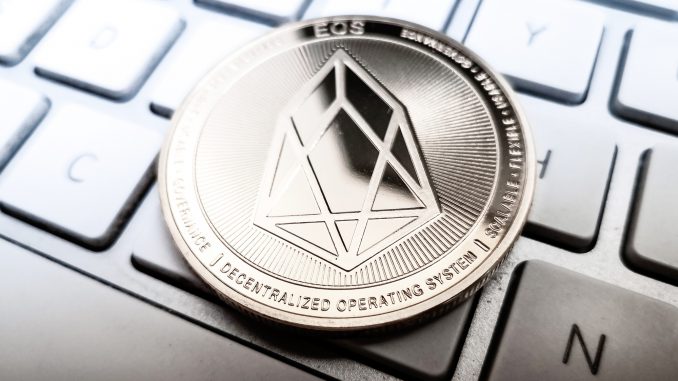 EOS Price Gets A Boost Amid Tim Drapers Arrival And Upcoming Blockchain Upgrade; Is $4 in View?advertisement

EOS has recorded a remarkable market performance within the last week. The price of EOS has increased by at least 20% within the last seven days. This lists EOS among the best performing cryptocurrencies in the last 7 days. This incredible price performance is believed to be a result of the excitement around its forthcoming September 23rd 1.8 upgrade and possibly, the news of Tim Drapers arrival at MakeSense, a decentralized messaging app which uses the EOS blockchain to ensure the privacy of its users.

EOS is currently ranked 7th by market capitalization on CoinMarketCap. Possibly the highest gainer of the top 10 cryptocurrencies listed on CoinMarketCap with almost a 5% increase in price within the last 24 hours, EOS has climbed up the charts by more than 20% within a week. Gaining around $0.53 in the process, EOS is presently hovering around the $3.85 per unit and is fast approaching the $4 mark. Its market capitalization looks strong and healthy at $3.58 billion with a 24-hour trading volume of $2.51 billion. The coin has constantly parried the competition put forward by rivals like USDT, BNB, XMR, and BSV.

Recently, MakeSense Labs, the company that recently launched a Decentralized Application (dApp) Sense. Chat, announced on Monday that renowned cryptocurrency and venture investor, Tim Draper has been appointed as a member of their Board of Directors. According to Founder and CEO, Crystal Rose,

Sense. Chat is the first messaging system of its kind utilizing blockchain technology for privacy and security. It has the potential for ushering in mass consumer adoption in crypto. As an early supporter of our mission and respected visionary in the space, Draper is an incredible asset for our teams success.

Tim Draper is the founder of Draper Associates and has also made significant contributions to major companies including Hotmail, Skype, and Tesla as an investor. Following Drapers onboarding process at Sense.chat, the community has seen incredible growth at EOS. According to Tim Draper,

The world is becoming decentralized. I am excited to support this amazing application. Sense.Chat improves human connections by allowing private, seamless messaging and payments.

Another reason for EOS price rise might be the upcoming upgrade. The EOS 1.8 upgrade was recently announced and developments towards the upgrade are constantly being presented to the community. The transition of the mainnet to a version 1.8 is of significant interest to the EOS community. The upgrade is slated for the 23rd of September and the community members are showing great enthusiasm about ...