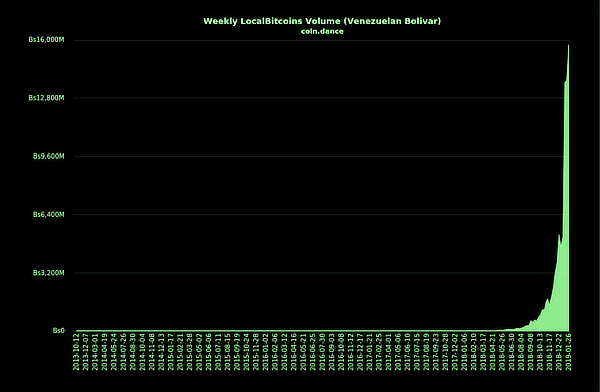 Some $7 million worth of bitcoin is exchanging hands in Venezuela everyday on just one peer to peer exchange, Localbitcoin.

Volumes are up across Latin America, including Mexico, Argentina, Chile and Colombia. The spike in Venezuela, however, is the most striking for prior to summer there was almost no bitcoin presence.

Starting in July 2018, volumes pick up and then explode especially in the past two months to reach considerable levels.

What was a few trickles has now apparently turned into an avalanche in Latin Americas once richest country which has now seen its monetary system completely collapse.

Following a flooding of oil markets by Saudis probably on the behest of USA as a punishment of Russias Crimea annexation, a number of oil reliant countries caught the flu, but it was Venezuela that fell very ill.

What happened afterwords isnt very clear, but presumably the central bank there turned on the printing press at full speed, causing a complete collapse of the Bolivar.

Venezuelans, therefore, slowly started turning towards cryptos mainly through mining. That indirectly may have given the military there a small revenue source as reports suggested they seized asics anytime they saw one.

Crypto money then started feeding Venezuelan children, with popularity slowly growing to the point Maduro announced the launch of a crypto token.

We hoped the gradual adoption of crypto would at the very least force the government to halt inflation, yet as months went on, the tragic situation continued.

That situation has now escalated with Venezuela taking centre stage in global politics. US, Europe and much of America on one side favor one claimed president, Russia, Turkey and Iran like another one.

Within US it appears theres a political divide. Sanders, ever so politely, effectively implicitly backed Maduro. Trump, perhaps worried all those refugees in Brazil, Colombia and elsewhere might head to USA as Syrians did ... 1 week ago by Decrypt 1 week ago by Binance