In this review, we’ll cover Streamity: a decentralized cryptocurrency to fiat money exchange. We’ll go into detail about the people behind Streamity, its key features, and token distribution.

So what is Streamity? And how does it differ to other cryptocurrency exchanges?

Registered in Singapore, Streamity differs from other exchanges as it claims to be “completely independent and secure due to the use of smart-contract architecture and the API of payment systems,” which is the headline on Streamity’s website. This means that unlike its centralized competitors, there is no middleman, making it a truly trustless exchange for both fiat and crypto currencies. As per Streamity’s homepage, the project intends to raise $20m in funding.

There is more to this trustless exchange that we will explore in detail later in this article. Let’s start by looking at the problems that Streamity claims to solve.

Under the market analysis section of the Streamity whitepaper, it outlines the following problems for cryptocurrency exchanges:

Streamity’s solution is to lower the costs for trading cryptocurrencies with its decentralized platform, known as StreamDesk and internal STM tokens. According to the Streamity roadmap, the prototype for StreamDesk was completed in August of 2017.

Once the platform goes live, StreamDesk will support the following features:

As per Streamity’s website, the firm describes StreamDesk as the following:

“StreamDesk is a P2P platform where both parties to a transaction are individuals. There is no comparison between StreamDesk and conventional financial institutions such as banks or stock exchanges, as fiat currencies are transferred directly between individuals.”

StreamDesk claims to be an innovative peer-to-peer platform based on blockchain technology, which makes it favorable option due to the safety and immutability of its transactions.

On page 7 of Streamity’s whitepaper, the founder, Vladislav Kuznetsov outlines the following benefits of the Streamity platform:

The following roadmap can be seen under the Roadmap section of the Streamity whitepaper, as well as its website.

The intention of STM tokens is to fund the StreamDesk decentralized application. STM tokens are a key element of Streamity, as it is its internal currency; all services of the project are expected to be paid in STM as per the brand’s token page.

On the project’s homepage, the Streamity project claims to be based on a popular mass service, and that the demand for the project’s services will be preserved under any conditions of the cryptocurrency market.

This means that the development of Streamity services and new users will “create a steady demand for STM,”’ by the company’s own admission.

Users get STM tokens at a price lower during the launch of the service, which can then be used with StreamDesk. Additionally, each person holding more than 1250 STM will get special privileges in the platform and will be offered even lower commissions with StreamDesk.

Vladislav Kuznetsov: CEO Founder - Vladislav has more than 10 years worth of experience in business and asset management for stock markets. His previous roles were at HP brand store and KVB print.

Dmitry Martianov: CTO Co-Founder - Dmitry is a business owner, software engineer and web developer with over 8 years worth of experience. He participated in projects with Pegas Touristik and Nordwindairlines.

Oles Sribny: Head of Investment - Oles is a trader-analyst and hosts numerous stock exchange workshops and training programmes. He spent 10 years trading in global markets and more than 6 years of experience in training and development.

Maksim Smirnov: Software Engineer - Maksim graduated from Bauman Moscow State Technical University with honors and worked in IT for 8 years. Five of those years were spent in banking as the head of the development unit of Alfa-bank, one of the largest commercial banks in Russia.

Sergey Bevzenko: Backend Developer - Sergey has a Master’s degree in process automation and worked with companies like Auchan, Michelin, Pegas Touristik, Nordwind, mos.ru, Active Citizen and many others.

Pavel Bolgarskih: Blockchain Developer - Pavel is an expert developer of smart contracts and Ethereum (ERC20 tokens). He has been interested in blockchain startups for more than 4 years.

Maxim Yarushin: Business Development Manager - Maxim spent more than 5 years in a global IT company and is considered a leader in business development and market entry.

Olga Prosalova: Marketing & Community - Olga is a marketing expert and community manager with a rich experience in Russian tech companies.

Daniil Lobov: Content Manager - Daniil worked in the Russian Ministry of foreign affairs as a translator.

Sergey Kolomiec: Online Coach & Investment - Sergey has been a trader and investor since 2010 on US exchange platforms.

Andrey Zolin: Blockchain Advisor - Blockchain developer. Was engaged in the development of the supply system on the Ethereum in Sberbank.

Aleksey Gaiduk: CEO, Founder, Fortifier - Fortifier is a company with extensive software development experience in the fields of insurance, healthcare.

Streamity offers a solution to one of the most pressing problems that exchanges face today: expensive fees, and a centralized structure. With StreamDesk working solely through smart contracts, there is no single point of failure for the platform, which protects both buyers and sellers from fraud and platform outages.

STM tokens could be seen as an attractive option for investors, as it locks in future discounts on the Streamity platform and allows people to participate in one of the world’s first truly decentralized exchanges. 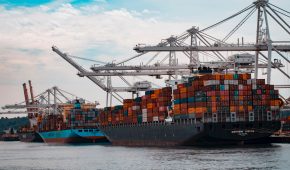 11 hours ago by Sam Town